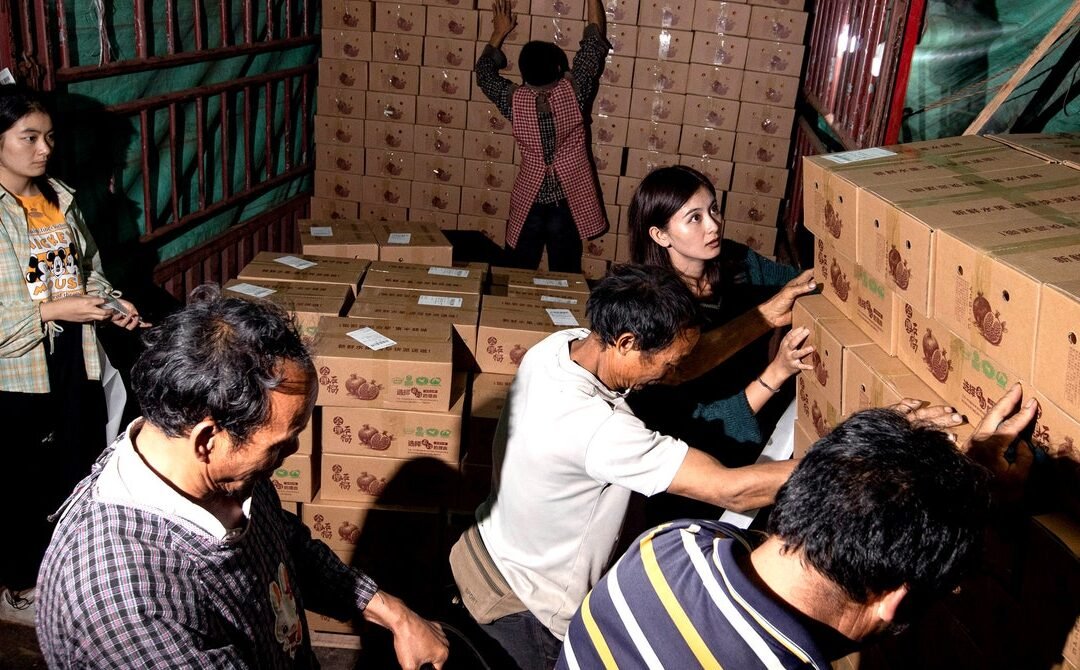 He Shuang, who grows pomegranates in southern Sichuan province, is a Pinduoduo New Farmer. The former flight attendant returned to her remote mountain hometown from the city of Kunming in 2017. She initially sent fruit by truck to wholesalers around China, who then resold the fruit to consumers. After switching to Pinduoduo, He could reach consumers directly; she says that created “strong and predictable demand for our produce, which in turn keeps our cash flow healthy.”

In a recent video, she plucked a pomegranate from a bush in her orchard and, because she “has no nails,” bit down on the peel to reveal its juicy seeds. Though she was stiff at first, He now shows an on-camera flair. “Livestreaming is just like chatting with customers to develop trust,” she says. Her spiking sales prompted Pinduoduo to recruit her for video and text marketing. He’s warehouse staff is now 150 strong, and her annual revenue for 2019 was 40 million yuan ($5.7 million).

Sofya Bakhta, an analyst at Daxue Consulting, says Pinduoduo’s group-purchase model helped aggregate dispersed consumer demand and connected those buyers with farmers, “effectively creating a scaled-up national market.” That lowered farmers’ costs and gave them some of the benefits of large-scale farming. In the past, says Gerard Sylvester, an investment officer with the UN FAO, farmers often suffered from uncertain demand and volatile prices. “We have seen several instances of a farmer driving his produce to the market, only to find that the price of the product has plummeted, much lower than his cost of production, and he dumps the entire harvest outside the market to avoid paying additional cost to the transporter to bring it back to his village,” he says.

Sylvester says Pinduoduo benefited from its own strong logistics network and the ease of mobile payments via dominant Chinese messaging system WeChat. He says Pinduoduo has lifted farmers’ incomes and made it easier for them to plan, helping to create new jobs in rural areas. In August 2020, Pinduoduo introduced Duo Duo Grocery, a next-day pickup service, to help farmers sell directly to local consumers.

See What’s Next in Tech With the Fast Forward Newsletter

From artificial intelligence and self-driving cars to transformed cities and new startups, sign up for the latest news.

Not all farmers are happy with Pinduoduo. Yang Lin sold 30 tons of apples per month on the platform in 2019, but says he “made no money” on Pinduoduo, especially after factoring in the ads he bought on the site to attract consumers. He thinks he could have made a profit on Pinduoduo if he sold more apples, but he quit because that tipping point seemed too elusive. The ads are not required. Asked about Yang’s situation, a company spokesperson says Pinduoduo “champions” farmers and works “to widen the market access for farmers so that they can sell better.”

Other critics have said Pinduoduo and its competitors are disrupting traditional sales chains to the detriment of some farmers, because those conventional networks are more balanced and inclusive than ecommerce algorithms that unfairly favor bestselling crops.

Dudarenok says technology “is not the only answer to elevating farmers out of poverty, or structurally improving their lives and businesses.” But she says Pinduoduo has provided a stable consumer base, sales channel, and logistics to sellers. “Both farmers and consumers win by cutting the middle man,” she says. Still, she says farmers “need to also ‘work for it’ with livestreams and buying ads. You need to be good to catch eyeballs.”

Bakhta says apps such as Pinduoduo are not likely to replace physical markets, because China is big enough to accommodate both. Her four years in China have convinced her that local markets are “more than a place to buy groceries. This is a kind of club where you can come, chat, practice your bargain skills and at the same time buy something fresh and tasty,” she says. “Offline stores, especially those with farm products, are part of the Chinese culture.”