An ‘Alt-Jihad’ Is Rising On Social Media 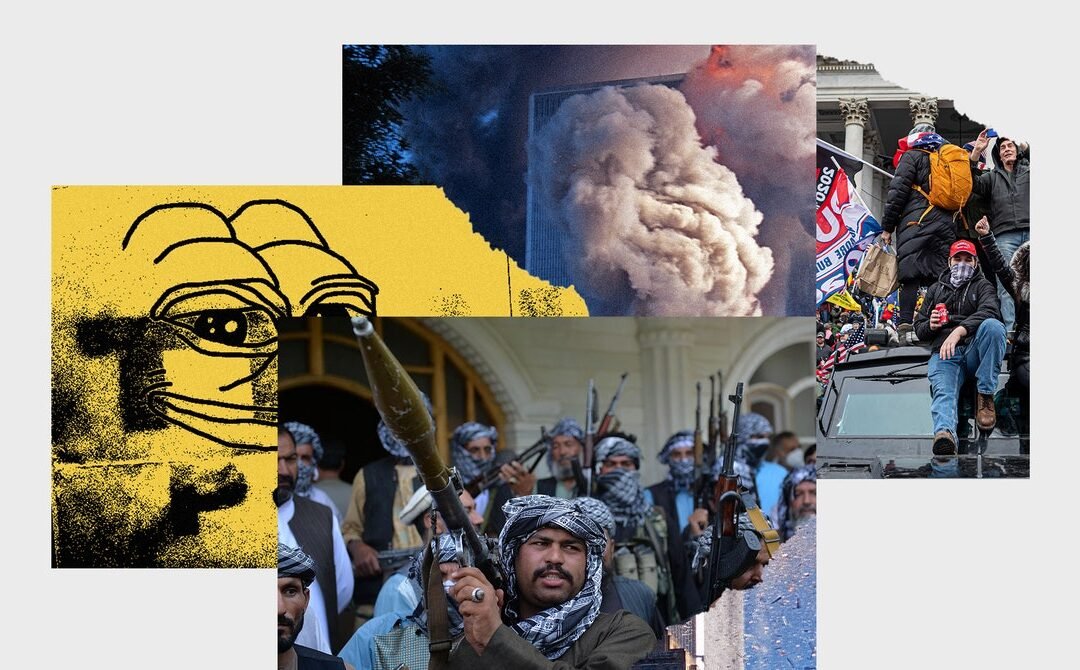 Alt-jihadists draw on the narratives of the alt-right and far right in Western culture wars while staying on brand with support for staple extremist groups such as Hezbollah, the Houthis, Hamas, the Taliban, Hayat Tahrir al-Sham, al-Qaeda, and the Islamic State. And while the September 11 attacks serve as a historical reminder to this generation of the power to strike at the West, this demographic simultaneously views the events with skepticism as a result of “truther” movements positing conspiracies that it was an “inside job” and a secret plan by a cabal of Jews. These alt-jihadists span an incredibly diverse ideological spectrum, straddling and supporting the notions of ethno-states while seemingly deriding white supremacists who do the same. This circle of toxicity completes what has essentially been brewing since the alt-right’s ascendency—an infectious set of abhorrent mores devoted to the hatred of liberalism, multiculturalism, sexuality, and democratic principles, with a dedication to going viral.

Across platforms, my team collected more than 5,000 memes and meme videos created and shared by alt-jihadists and the digital communities around them. Roughly 20 percent of these pieces of content were supportive of militant groups, including Hamas, the Taliban, and jihadist organizations such as Hay’at Tahrir al-Sham. We found similar dynamics with supporters of Iran-backed militias like Hezbollah and the Houthis. All of them used some form of alt-right trope or imagery—such as Pepe the Frog, GigaChads, Wojaks, and YesChads!—and all exhibited some affinity for a range of jihadist groups. Not only did young jihadists appropriate alt-right aesthetics, they similarly adopted the language of the other adjacent “chan” cultures, using words like “king,” “chad,” “based,” and “wifu,” transliterated into Arabic.

This group has also adopted the alt-right’s organizational tactics. Buried deep across six Facebook pages and groups, representing some 20,000 followers, are accounts engaged in explicitly jihadist meme discussions and production, most of which is in Arabic and supportive of the Islamic State and Hay’at Tahrir al-Sham. These users rely on the imagery of the alt-right to fuel their discussions, using videos of Pepe the Frog as a “Jihadi John” character preparing to behead an “LBGTQ+ Wojak” with an Islamic State nasheed playing in the background, or GigaChads to “own” liberal Muslims with support of the Taliban takeover. These smaller networks of alt-jihadists also linked to Telegram channels connected to a younger generation of alt-jihadist graphic designers, remixing and creating 8-bit graphic videos in support of the Islamic State, as well as Hay’at Tahrir al-Sham.

In what appears to be a natural evolution of trolling communities going global, alt-jihadists from the Middle East and North Africa are now also developing memes alongside groups in the West. For instance, as white nationalists began creating and sharing hyper-stylized cyberpunk music videos known as “fashwave,” alt-jihadists simultaneously created a parallel subculture known as “mujahidwave.” This version runs the gamut of support from resurrecting the Rashidun Caliphate to overt Islamic State messaging, blending the same aesthetics and synth styling.

The fusion of alt-right and jihadist aesthetics was perhaps clearest on the 20th anniversary of the September 11 attacks, when a coalition of alt-jihadist meme producers ran a competition to see who could create the best meme of the attacks. The challenge was shared through a central page on Facebook, coordinated on Telegram, and A/B tested on Discord. Soon, key accounts across all of the platforms began toiling away on GigaChad attack footage; Angry Birds, Salt Bae, and Doge spin-offs, and of course Pepe the Frog piloting one of the planes as it slammed into a tower. It was a celebration of America’s defeat—a defining notion of alt-jihadist subcultures online. Not to be mistaken for simple shitposting, the mash-ups and overall movement of alt-jihadists represent a turning point in both extremist support and our modern era. It is a harbinger of the future of extremism, in which the cultures of seemingly oppositional groups meld and represent a much more noxious and undefinable challenge for technology companies, civil society, and governments.